Inverness: As told by one of our GTO’s

Clive, a Probus Group Travel Organiser, recently sent over a lovely piece about his group tour to Inverness.

You can read his first-hand account below, titled A Scottish Highland Delight.

“There have been Probus holidays in the past that caused some consternation both before and during the holiday. However, the most recent 5-day holiday to Inverness was the most challenging yet. Originally planned for 2020 and postponed because of the pandemic, the holiday was rolled over to 2021 with the 17th May decided for it to begin. The third wave of the pandemic then led to a further postponement until June 28th. With the date set, the government then announced further restrictions until the 19th of July, so what do we do? After much deliberation, the only sensible option was to go for it. 42 people took part, mostly Probus members including some from the Meridian, Dormans and Horley clubs, three widows of former members and four people from the Perdido swing band in Haywards Heath.

Getting to Inverness gave several options but for most of the group, going by train proved to be popular with only 2 deciding to drive and extend their holiday afterwards. But by which train then became a question? Catching the 12.00 through train from Kings Cross was favoured by about half but the remainder had never experienced the sleeper train, and so berths were arranged for 9 couples and 4 singles. Even with Covid restrictions still in place, both trains were very crowded. The day train travellers arrived on schedule in mid-evening to enjoy a late dinner even though they had been well fed and watered along the way. The sleeper passengers were not so lucky; after a prompt start from Euston and getting used to the idiosyncrasies of the cabin, the group settled down for some fitful sleep. Not long after Perth, the fire alarm aroused those not yet awake and the train ground to a halt. Eventually, we were told that the second locomotive had caught fire and that electric power to the train would be restricted. Fortunately, the first locomotive was able to take us to Kingussie (see picture) whence busses were arranged for the onward journey to Inverness.

Having been breakfasted or refreshed at the Mercure hotel, Marian, from D&E coaches arrived to take us to Dochgarroch Pier for a 2-hour cruise on Loch Ness, basically to Castle Urquhart and back. It was blisteringly hot with brilliant sunshine, a real treat of summer. Due refreshments were consumed on board. A return to the hotel enabled those who had endured the sleeper to catch up on sleep whilst others strolled around the city. The now reunited group enjoyed a good three-course dinner in the hotel accompanied by various beverages to suit.

The next day, Wednesday, was a free day so people chose from various suggested options. Some stayed put in Inverness and enjoyed a city tour on a hop on hop off bus. The bravest were those who took the train to Kyle of Lochalsh to view the Isle of Skye. Others went to Nairn or Elgin and sampled the delights of those small towns. Another good dinner awaited us back at the hotel. By now, we were getting used to the social distancing rules of the bar and how to circumvent the silliest of them.

Thursday was an adventurous day beginning with a visit to Culloden, starting with a walk around the actual battlefield before entering the visitor centre to learn all about the Jacobite rebellion and witnessing the battle for real in a four-wall video presentation. From there, the coach took us to Aviemore to catch the Strathspey steam train to Broomhill and return. Watching the locomotive take water at Boat of Garten brought back memories for many. Trolley service on the train tempted some to enjoy a lunchtime glass of wine. After returning to Aviemore, we travelled the short distance to Loch Garten and the RSPB centre in the nearby nature reserve. Hoping to see both ospreys and red squirrels, we were disappointed, but our guides gave excellent presentations on the flora and fauna of the district. Back at the hotel and a later time for dinner was an excellent excuse for a goodly few pre-meal drinkies!

Our last full day saw us travelling northwards across both the Cromarty and Dornoch firths to Golspie and Dunrobin Castle. Built in the French style with gardens to match, this was the home of the Dukes of Sutherland. The site dated back to the 14th century, but the present building was designed and built by Sir Charles Barry in the 1830s. Still owned by the family, the castle is no longer lived in but has been open to the public since the mid-1970s. With typical baronial splendour, the numerous sitting, dining and bedrooms reflected the grandeur of the age. Many of the room contents reflected the last time it was lived in as a home including a Hornby Dublo train set. The added attraction of a falconry display in the lower garden proved to be popular entertainment. The day continued with a visit to the Falls of Shin, famous for sightings of leaping salmon. We were not disappointed although you had to be sharp-eyed to see them.

Our last night in the hotel had the customary pre-dinner farewell party where thanks were given to those associated with the organisation of the holiday and to the hotel staff at the Mercure for looking after us so well. It was an opportunity for our Chairman, John Hazeldean, to speak with club members face to face, the first time a chairman has done this since February 2020. Early breakfast the next morning, Saturday 3 July, enabled us to catch the 07.55 train down to Kings Cross in London and from there to our various homes in the East Grinstead area. Despite its difficult start with changes of date, the holiday was a great success. Only a few of the group had been to that part of Scotland before and many stated their intention to return. The group gelled extremely well, nobody encountered an accident, and nobody fell ill. Thanks once again to Airedale for their patience and endurance in doing most of the organisation for the holiday made even more enjoyable by the superb weather throughout. Although not on the holiday, thanks are expressed to Martin Sadler, the club treasurer, who managed all the financial transactions over a period of two years.”

If you would like to visit Scotland with your group, then have a look at a similar tour here.

Our Most Popular Articles 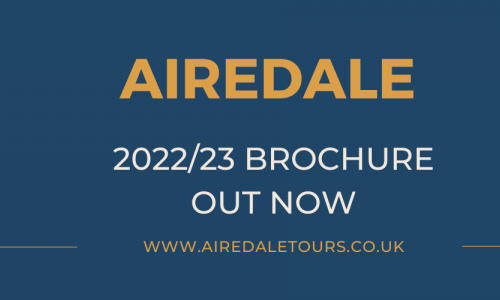